How to work within a large team.
This was the first time I have worked with a team of this size (36 at the largest) and this came with it own sets of problems and difficulties. Communication was a big one, it became much harder to implement or change game features because we needed to make sure that everyone who had work related to a certain feature would be informed about the implementation or changes.


My main responsibilities were the quests in the world and I ran into the last 2 quite a bit during development. I was also in charge of the on-boarding for the game which did give me a lot of "cleaner" methods of dealing with these difficulties. Initially it was decided that the player would slowly unlock some of their farming tools by completing quests in the world. This would be very hard to implement though. As some quests just required the player to have a certain tool, and it would be way too much effort to have them first go and complete the other quests just to get the tool to complete the current quest.
​
So in the end it was decided (after a meeting between myself, the lead designer and the project lead) that we would give almost all of the farming tools at the beginning, with just 1 being hidden behind a "psuedo quest" (it was really just a tutorial disguising itself as a quest).
​
​
Quest system with limited resources.
This is something I struggled a lot with during development. There were a ton of cool quest ideas that were never implemented either due to limited time or resources (you could argue that time is a resource but that it neither her nor there). When I say resources I don't just mean limited art assets (which was also a factor) but also limited capabilities of the quest system. The way the system set up was really more oriented towards simple quests (collect item x and bring it to me) which would become boring quite fast.
​
Because of this I sat down with the programmers a lot and talked about how we could push the system further and further and in the end I think the quests that are implemented in the game are quite decent. When it comes to variety and fun.

One of my roles on this project was to provide technical support to the level designers, create functional gameplay moments for them and teach them the basics of Unreal Blueprints
Below I will show a short overview of one of the gameplay functionalities I added to the game.

This is a separate blueprint from the word door. This actor is one of the “books” the player will pick up which will contain a word.  It simply adds itself to an array within the word door and afterwards hides itself. (It cannot destroy itself otherwise the reference from within the word door will be invalid)
Word door

This logic changes the camera from third person to first person focussed on the door and allows the player to move around on the door using the movement keys. 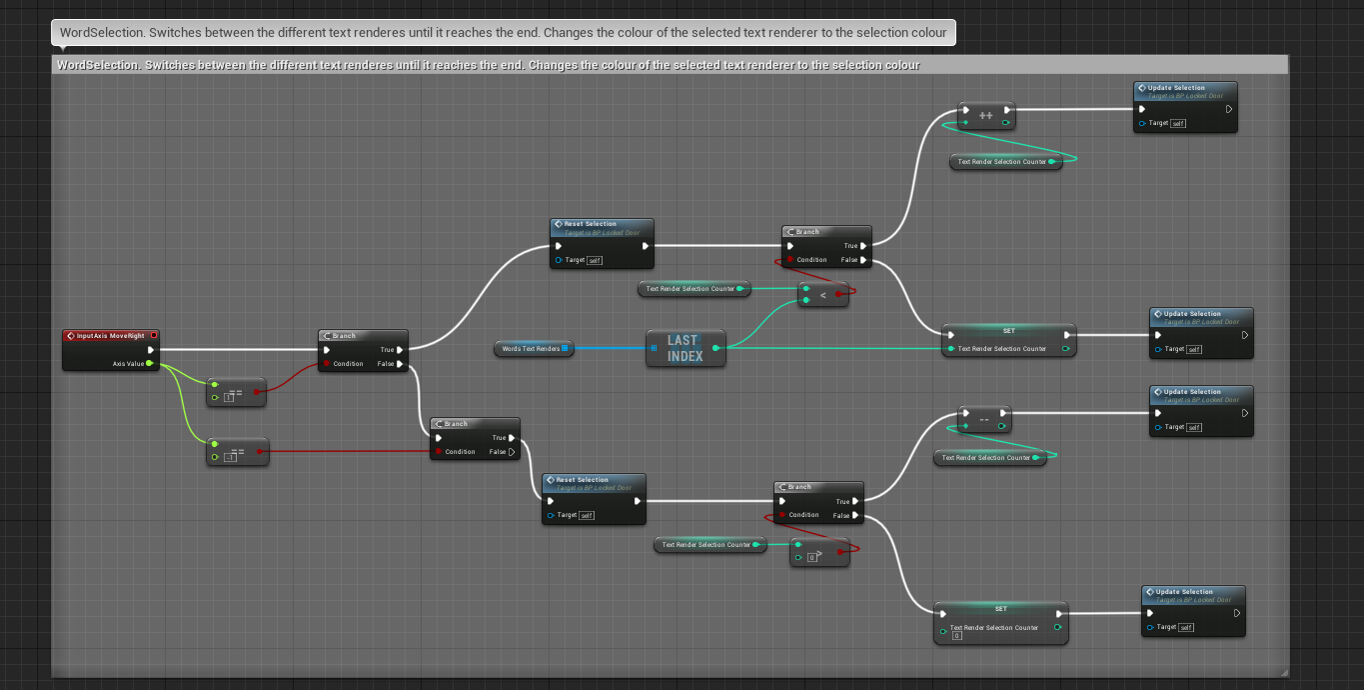 This is the actual logic that scrolls the player through the  various word slots. If the player pressed the right movement key the word count will go up (since I have set up the text renders from left to right this means they will go to the right) it will also change the colour of the currently selected word slot.

This logic will allow the player to “scroll” through their know words in one word slot. Every time they press the E key it will go to the next word in the word array. It will then also replace the current text in the word slot with the new text from the array.

This will check each of the words filled in by the player(it will actually check the word index of the words) and if they match up with the sequence set up on the door it will move the door into a direction chosen by the level designers.

This returns the player to their normal view and controls.